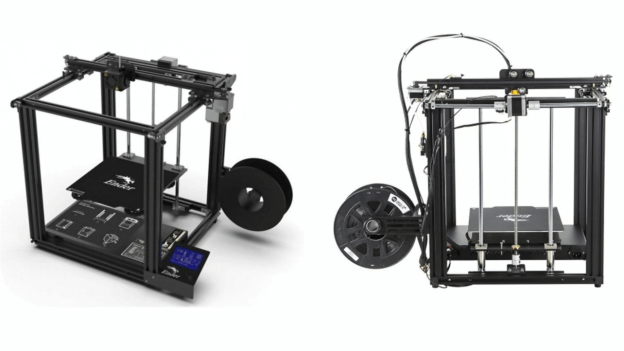 While most people were impressed with the Ender-3 printers, some of the most common requests from clients of Creality was that they establish a box-like 3D printer. Following the demands of their clients, Creality established Ender-5. The establishment of Ender-5 led to the birth of Ender-5 plus and Ender-5 Pro, respectively.

Following the three modes of Ender-5 3D printing machines, there have been several comparisons and questions concerning the differences between the three.

Ender-5 Pro is an upgraded version of Under-5. Compared to the latter, Ender-5 Pro runs more quietly. It is also more accurate when it comes to printing. The mainboard of the Ender-5 Pro 3D printer features thermal runway protection as well as a protective case for the bootloader.

The metal frame of the 3D printer also promotes extra durability and stronger pressure when the filament is pushed through the nozzle of the printer. The ender-5 is less superior as it has a standard extruder frame while the latter has an adjustable extruder gear that is more suitable for filaments.

The Ender-5 Pro also features an improved mode of filament tubing. It can, therefore, be used to print with flexible filaments and other forms of exotic materials.

This 3D printing machine is more massive as compared to the two that came before it with a larger printing format. This means that it suits more printing requirements, and it can achieve better printing results in a short time.

The Ender-5 Plus 3D printing machine features a BL touch feature with an auto bed level pre-installed. This means that you can plug the printer in and start printing. It also features a touch screen feature, filament and filament sensors, updated Y-axis motors, and a dual z-axis motor.

The differences between the Ender-5 FDM printing machines lie in the areas of size, platform, the Y and X-motors, and screen technology. Such features indicate that Ender-5 is less superior to Ender-5 Pro, which is inferior to Ender-5 Plus. Despite the differences, the three forms of FDM 3D printing machines stand out as the most preferred in the market.

Are you worried about anodized aluminum?

How To Successfully Build Your Products Prototype